New US civilian harm policy: 5 takeaways for the Netherlands

On 25 August 2022, the US Department of Defense (DoD) released its long-awaited Civilian Harm Mitigation and Response Action Plan (CHMR-AP). This document announces a series of actions that, once implemented, will mean an overhaul of current US policy regarding the monitoring, mitigation of, and response to civilian harm caused by US military operations. Its development was prompted by a directive of Defense Secretary Austin after media reports about the August 2021 Kabul (Afghanistan) and March 2019 Baghuz (Syria) civilian casualty incidents brought to light systemic failures in how the US deals with and responds to such events, as well as civil society calls for a complete overhaul of US policy in this area.

Crucially, the influence of the CHMR-AP’s implementation will extend far beyond the United States, with the potential to also impact the policies and conduct of many other military forces, not in the least those of its NATO allies. Here, we consider the new policy’s implications and lessons for the Netherlands specifically. Consideration of these matters is particularly timely as the Dutch Minister of Defense recently outlined her own ‘roadmap’, announcing changes in how her ministry deals with civilian casualties caused by the Dutch military (PAX has elsewhere reflected on the MoD’s plan’s limitations). PAX, along with several other civil society partners, has been engaged in ongoing discussions with the Dutch MoD over the few past years to strengthen Dutch policy and practice in this area. The CHMR-AP can serve as a practical example of how the MoD can implement the type of policy change that PAX and others are recommending.[1]

Implementation of the CHMR-AP action points will have two main implications for the Dutch Ministry of Defense (MoD). These relate to sections 9 and 10 in the action plan, which are both premised on the recognition that actions by US ally and partner forces, or by multinational operations of which the US is a part, can cause civilian harm, which in turn may harm US legitimacy and military-strategic objectives. Both sections are meant to address this and set forth future expectations of the US regarding ally and partner forces’ policy and behavior, including those of states like the Netherlands. In section 9, the CHMR-AP calls for policy that requires the US DoD to ensure that efforts to reduce the risk of civilian harm and adequately respond to civilian harm incidents become part of security cooperation or assistance programs, thus setting (additional) requirements of ally and partner forces where it concerns their CHMR capabilities and actions. It further puts forward the concept of ‘tailored conditionality’, meaning that the US can make changes to existing security cooperation programs in response to actual CHMR outcomes of partner operations: if partner or ally forces’ actions and response to civilian harm events are not up to the US-decreed standard, this can affect military cooperation with and assistance from the US for the states in question.

Section 10 recognizes that, in multinational operations specifically, inadequate information sharing between different military forces increases the risk that operations end up harming civilians. We have seen justification for this conclusion in the past, for instance in the 2015 Operation Inherent Resolve strike on an IED factory in Hawija, Iraq, where the Dutch military authorized and conducted an airstrike that resulted in at least 85 civilian deaths, hundreds of injured civilians, as well as widespread destruction to the area, based on incomplete information – available to the US in full at the time – about risks to the nearby civilian population. The CHMR-AP now puts forward policy that will require the US DoD to apply CHMR policies and practices in multinational operations, to encourage and support partner forces in the implementation of CHMR activities, and to contribute to realizing shared assessments of, and responsibilities for monitoring of and response to civilian harm.

In conclusion, the CHMR-AP elevates CHMR standards within the US DoD and, crucially, sets forth similar expectations with regard to ally and partner forces like the Netherlands. While the Dutch MoD has already begun to improve its civilian harm policies and procedures, more is needed in this area. Here too, the CHMR-AP can offer valuable lessons on what next steps can and should be taken.

What lessons the Dutch MoD can draw from the CHMR-AP

We will highlight three action points from the CHMR-AP here. This is not to suggest that there is not more to take away from the document. Rather, as an organization that seeks to elevate the civilian perspective in international discussions on the Protection of Civilians, we choose to highlight three specific activities that have the potential to better incorporate attention for civilian needs and the civilian perspective in military operations. Combined, these activities – when implemented – will lead to a more thorough understanding of the civilian environment, better inclusion of civilian input in military assessment processes, and to adequate response when civilians end up harmed by military operations.

All in all, the US is about to take a significant step forward in how it seeks to minimize, monitor, mitigate and respond to civilian harm from its own operations. In doing so, it is also raising its expectations with regard to the policies and practices of partner and ally forces, such as the Netherlands. As the Dutch MoD is currently revising its own civilian harm policies, the time is now to be as ambitious as it can be to ensure it meets those expectations and, most importantly, does all it can to better protect civilians in conflict, also heeding long-standing calls by civil society to this end.

[1] One main point of criticism of NGOs, including PAX, on the CHMR-AP is that it is a forward-looking document and does not include an ambition to review and reassess past US-caused civilian harm cases. This has been criticized for showing a lack of accountability and because it prevents the US DoD from looking back at these cases and, in so doing, learning from past mistakes. 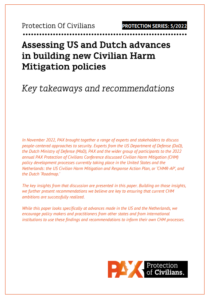