The Dutch Minister of Defense recently announced new policy steps to deal with civilian harm during Dutch military deployment after a series of consultations with a consortium of civil society organisations, including PAX. While the announced changes represent a marked improvement, PAX and other members of the consortium warn that several pressing loopholes and missed opportunities remain in this new policy.

On April 7 2022, Dutch Minister of Defence Kajsa Ollongren sent a letter to Parliament introducing the steps she wants her Ministry to take in the short and (medium) long term regarding civilian casualties during military deployment. These steps concern, inter alia, transparent reporting on civilian harm, the strengthening of internal (military) procedures, decision-making processes, and monitoring, evaluation and accountability. These commitments are a welcome development after shortcomings by the ministry in this area have come to light in the past years through reporting on civilian harm events in Hawija (Iraq) and Chora (Afghanistan).

PAX and other consortium members are appreciative of this development, but warn that various loopholes remain in the announced policy, which could lead to (the mishandling of) future civilian harm events. Read our full analysis and statement below. 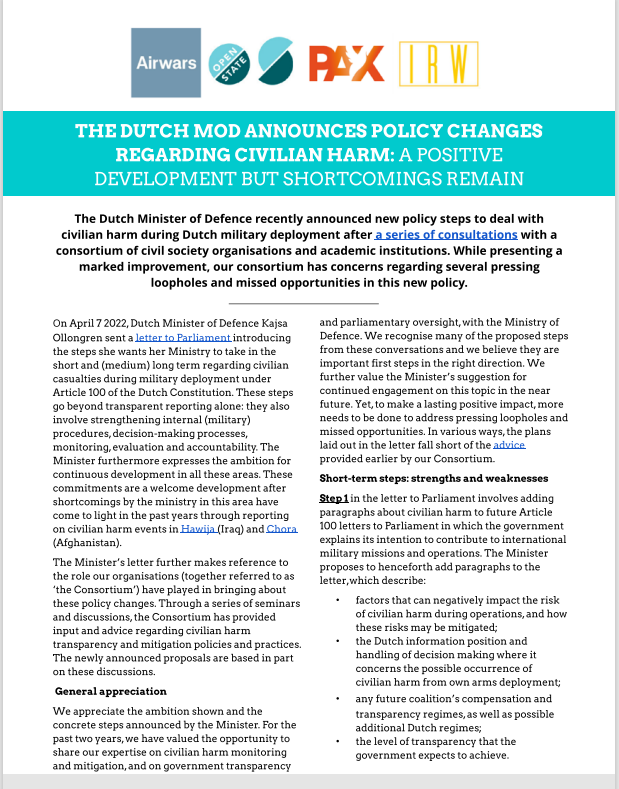