It is six years ago to the day, on 3 June, that Dutch F-16s carried out an airstrike on an IS ammunition factory in the Iraqi town of Hawija. Over 18,000 kilograms of munition detonated, resulting in over 70 civilian casualties, hundreds more injured and over 400 houses destroyed. The Dutch participation in the war against IS was in the Netherlands well known. Yet, the consequences thereof remained in this case a secret for over four years. It was not until 2019 that the airstrike on Hawija and Dutch responsibility was brought to light by a joint investigation of NRC and NOS.

Right after this revelation, a parliamentary and public debate unfolded. Politicians that were kept in the dark were quick to ask: Who in the government knew what and when? Who lied to whom? In other words: What are the Dutch political ramifications of this attack gone wrong? The commissie Sorgdrager, installed in January 2021, is dedicated to researching ‘What went wrong in the targeting process’. Their mandate focuses on the run-up to the attack and the lessons to be learned for future military operations. As of yet, the effects on civilians remain outside the scope of research.

Long term effects are disregarded
The Dutch investigation – and thereby our collective memory of the event – has a worrying blindspot: the voices of the people whose society has been completely altered by this airstrike. When one speaks of the bombardment and consequential explosion, only the direct consequences are mentioned: the casualties, injuries and material damage. The long term effects are disregarded, even though these are lived through every day by the civilian population. Behind the statistics of an injured person, there might be a breadwinner who is not able to provide for his or her families’ food and education; behind every destroyed water supply, there is an increased chance of transmittable diseases; and behind every day passing, there is a night of sleep deprivation and nightmares. The Ministry of Defense strategically claims that it is impossible to know what exactly happened in Hawija, both the direct and indirect consequences. For one, Iraq would not be safe enough for Defense to visit.

“No, I could not deliver my voice, I could not. Only you came, and God willing, my voice will reach out to whom it may concern.” - Father of young children whose back was injured in the airstrike on Hawija.

We disagree. That is why peace organisation PAX and The Intimacies of Remote Warfare programme (Utrecht University) partnered up with the local organisation Al-Ghad League for Women and Child Care to study this case. This spring, over sixty interviews were conducted with survivors of the airstrike in which they reflect on how their lives were affected by the bombardment. In addition, over 300 social media posts reveal the opinions on the airstrike of the population at large. With this joint research we aim to inform the Dutch public, parliament and Ministry of Defense of the long term effects of the violence executed in our names. This kind of research is necessary to properly assess and mitigate civilian harm. In addition, it is necessary to question whether this so-called precision warfare actually contributes to the permanent safety of civilians. The first research results clearly indicate: the victims mainly express their grief about the painful lack of recognition and accountability regarding their suffering, rather than discussing questions of guilt and liability.*

Listening to stories
‘Knowing’ is more than just counting the dead. Knowing is also listening to the stories of survivors, who rehumanize the victims of war. This way, we, in the Netherlands, have the opportunity to understand a war that is normally so far removed from us. Knowing means making sure that the voices from Hawija are heard here by those who it may concern. Knowing is about making sure their voices will reach those who exercise democratic control over the wars waged by the Netherlands.

*The publication of this research is scheduled for fall 2021.

Isa Zoetbrood and Guusje Bloemen work on this project as researchers at the Intimacies of Remote Warfare programme. Ali Maleki is research consultant at PAX for peace.

More about the Hawija Research 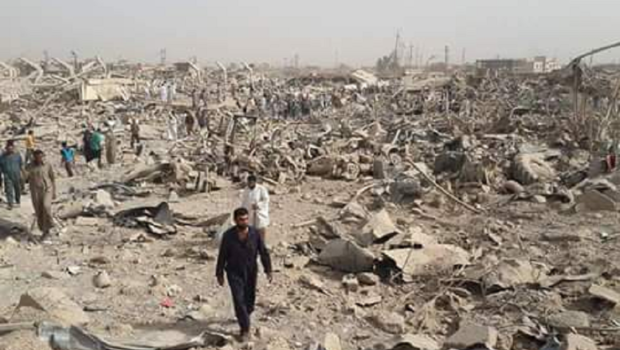