Understanding the ways civilians are negatively affected by violent conflict is vital to improve protection practices. This research project studies the long-term effects of civilian harm resulting from a Dutch airstrike on the industrial area in Hawija, Iraq, in 2015.

Transparency and Accountability for Civilian Harm in Hawija
On the night of 2 June 2015, a Dutch F-16 taking part in Operation Inherent Resolve bombed an Islamic State munitions factory in the industrial area of Hawija, Iraq. The airstrike and its secondary explosions resulted in at least 70 civilian deaths and many injuries, and destroyed the neighborhood completely. The Netherlands’ role in this airstrike was revealed in October 2019 after a joint investigation by Dutch news outlets NRC and NOS.

In partnership with Al-Ghad League for Woman and Child Care and Utrecht University, PAX’s Protection of Civilians team is researching the long-term effects of civilian harm resulting from the airstrike in Hawija. The field research combines victim and expert perspectives to understand broader and longer-term effects. The research defines these negative impacts as ‘reverberating effects’ to capture the widespread, continuous and cumulative impact. This research aims to increase transparency and accountability regarding the Hawija incident, and draws lessons to inform militaries about broader civilian harm mitigation.

Join us in Amsterdam or online (April 13) for the launch of a new report on the civilian harm effects of the Dutch airstrike on Hawija. 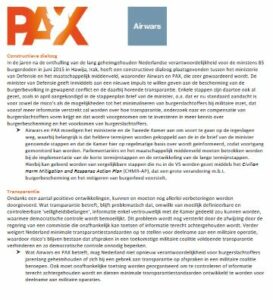 Larger budget for armed forces should include fund for civilian harm 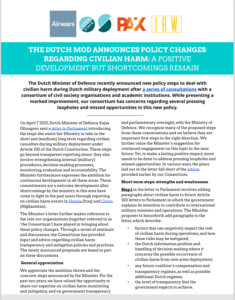 The effects of the Dutch airstrike on Hawija 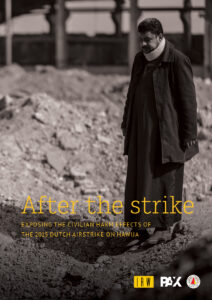