This policy brief provides recommendations for consideration ahead of the next United Nations Peacekeeping Ministerial-level Meeting hosted by the Republic of Korea in 2021, as well as the accompanying preparatory meetings on key priority areas. Though this brief was informed through consultations and a virtual roundtable series on Training for the Protection of Civilians hosted in various partnerships with the Governments of Bangladesh, the Netherlands, the Republic of Korea, Rwanda, and Uruguay, as well as with the Stimson Center, this policy brief was produced by PAX and does not represent the views of the aforementioned
Governments or Organization, or of any other participants.

From the very first, United Nations (UN) Peacekeeping Ministerial-level Meetings have served as instrumental opportunities for States to take stock of the progress and challenges faced by UN peace operations, and to take vital next steps in closing capability gaps through tangible pledges to improve operational effectiveness and better ensure successful fulfilment of mandates. The upcoming 2021 Ministerial in Seoul will also be an important opportunity for States to reaffirm their commitments to peacekeeping and assess implementation of the explicit priority areas outlined in the Declaration of Shared Commitments on UN Peacekeeping Operations of the Secretary-General’s Action or Peacekeeping (A4P) initiative, and in other recent reform agendas.

Efforts to improve implementation of protection of civilians (PoC) mandates in UN peacekeeping operations have consistently been underscored as priority areas of focus for Member States and the UN Secretariat in recent years, including as an A4P priority theme. However, challenges in implementation remain despite such efforts, including the effective delivery of UN developed courses in accordance with UN standards and the development of training courses at national and international peacekeeping training institutions that are based on UN standards. In consultations and events, PAX noted particular concerns around the need for more context-specific training, a lack of outcome evaluations and integrated feedback loops, limited capacities to plan for and adjust to local realities, and a general lack of prioritization and integration of related protection agendas, such as the Women, Peace and Security agenda.

Recommendations for Member States ahead of the 2021 UN Peacekeeping Ministerial
This policy brief intends to serve as a set of recommendations for consideration by Member States in their planning and preparations for making concrete and impactful pledges on improved training for better protection at the 2021 Ministerial. This brief will draw on consultations and events (co-)hosted by PAX outlining the importance of improving and mainstreaming PoC in all peacekeeping training curricula and proposing a number of recommendations seeking to address the most salient concerns.

This policy brief was produced by PAX and does not represent the views of the mentioned Governments or organizations, or of any other participants. 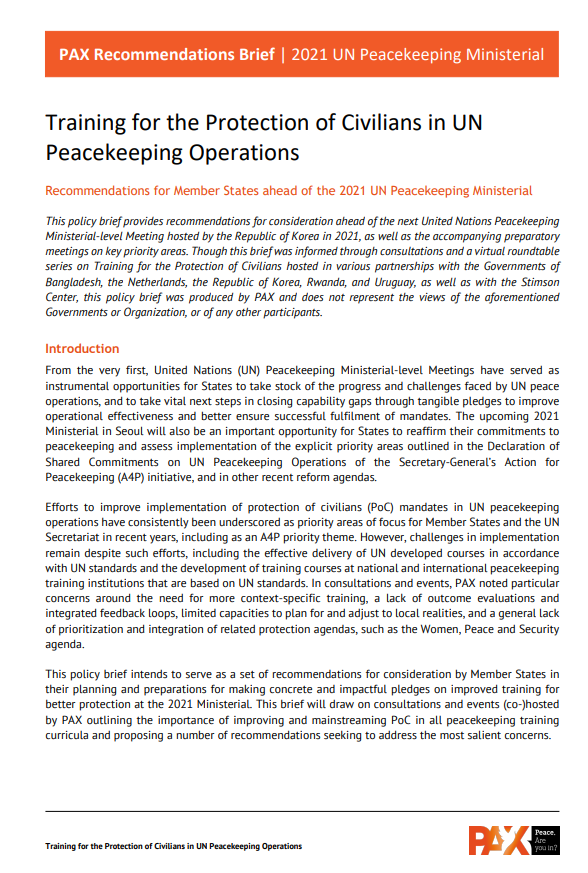