With the conflict in eastern Ukraine now in its eighth year, recent tensions between Russia and Ukraine in March-April 2021 point to the risk of an escalation of violence. Fighting continues and deaths, injuries, and the destruction of homes and civilian infrastructure mount. At least 3,375 civilians have been killed in the conflict, and more than 7,000 civilians wounded. In response, Ukraine is in the process of developing a comprehensive approach to civilian protection, inspired by NATO’s Protection of Civilians (PoC) experience and policy. As part of Stimson’s ongoing paper series on NATO and PoC, experts from the Center for Civilians in Conflict (CIVIC) draw on findings from CIVIC’s programmatic work in Ukraine since 2016 and develop a series of recommendations for NATO and Ukraine to ensure that this important work on PoC is captured and continued. Ukraine’s nascent PoC framework demonstrates that NATO should systematically and proactively integrate PoC into current and future partnership frameworks, political engagement with partners, and security force assistance activities and measures.

In the aftermath of the 2014 Ukrainian Revolution and Euromaidan movement, the Russian Federation annexed Ukraine’s Crimea while playing a decisive role in establishing and resourcing the functioning of the so-called “people republics” in the parts of Donetsk and Luhansk regions, escalating an initial burst of social discontent into an armed conflict. This conflict posed the most significant challenge for Europe’s collective security since the Balkans war in the 1990s. Europe’s territorial integrity was threatened. A NATO Partner was under attack.

From the beginning of the conflict, NATO steadfastly supported Ukraine’s sovereignty and territorial integrity. Ukraine is a NATO Partner and was elevated to the status of “Enhanced Opportunity Partner” (EOP) in June 2020. The country is key to the Euro-Atlantic security agenda. According to NATO, “In response to the Russia-Ukraine conflict, NATO has reinforced its support for capability development and capacity-building in Ukraine. The Allies condemn and will not recognize Russia’s illegal and illegitimate annexation of Crimea and its destabilizing and aggressive activities in eastern Ukraine and the Black Sea region. NATO has increased its presence in the Black Sea and stepped up maritime cooperation with Ukraine and Georgia.”

Now, with the conflict in eastern Ukraine in its eighth year, recent tensions between Russia and Ukraine in March-April 2021 point to the risk of an escalation of violence. Fighting continues and deaths, injuries, and the destruction of homes and civilian infrastructure mount. At least 3,375 civilians have been killed in the conflict, and more than 7,000 civilians wounded. Today, 3.4 million civilians in Ukraine require humanitarian assistance or protection services. Meanwhile, the 2.8 million people living in the Donbas region of Ukraine face daily challenges. These include restrictions on freedom of movement, mines and explosive remnants of war, barriers to accessing official documentation such as birth and death certificates, difficulty receiving payment of social benefits and pensions, and a lack of access to psychosocial support services. The dramatic situation faced by the population of Donbas called for the Ukrainian authorities to develop a new, robust approach to civilian protection. During this process, NATO’s Protection of Civilians (PoC) experience and policy were a source of inspiration for Ukrainian policy- and decision-makers as they shaped Ukraine’s nascent PoC frameworks.

This publication is part of the "Strengthening NATO’s Ability to Protect" project, a partnership with Stimson and PAX, supported by the Dutch Ministry of Foreign Affairs 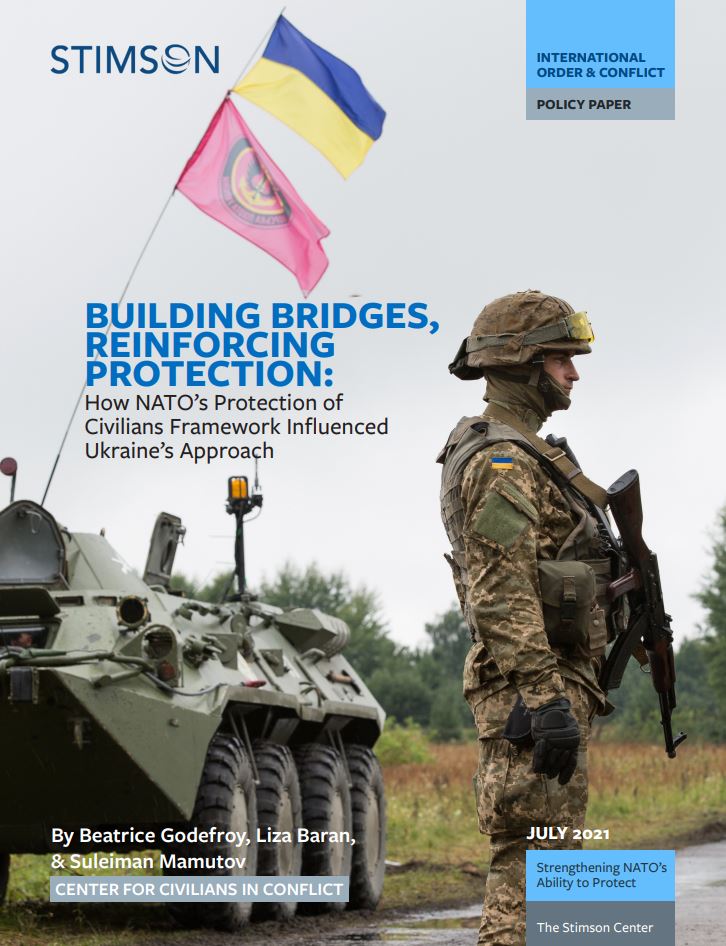