A political and diplomatic case for PoC at NATO

As NATO faces a shifting and evolving strategic landscape, PoC will continue to have political and military relevance for NATO in future operating environments. While much of the work on PoC must take place in a military realm, political and diplomatic perspectives will also be critical in the years ahead. NATO’s PoC policy and supporting documents, as well as progress in implementation over the past five years, are a significant achievement and reinforce the unique values-based nature of the Alliance. NATO has led the way in actual application and demonstrated real-world success. A shifting strategic environment with new priorities should not marginalize the continuing importance of PoC to NATO’s core identity; instead, it should necessitate the reaffirmation and recalibration for a new era. NATO must re-focus political attention on PoC implementation with a specific focus on resourcing and adapting the concept to address new threats.

NATO’s established approach to the Protection of Civilians (PoC) over the past five years, and its experience in Afghanistan and Libya over the past two decades, positions it as a leader in the global protection space. As NATO faces a shifting and evolving strategic landscape —winding down one out-of-area operation and focusing on Allied unity, territorial defense, great power competition, and hybrid threats— PoC will continue to have political and military relevance for NATO in future operating environments. While much of the work on PoC must take place in a military realm —including further development and diffusion of the concept as a core military capability— political and diplomatic perspectives will also be critical in the years ahead.

In future conflicts, NATO political authorities will task a military mission and must absorb, internalize, and continuously build a deep understanding of PoC. The Alliance can maintain a strategic and ethical edge against its adversaries by remaining a leader in implementing robust PoC approaches and ensuring it remains part of the operational mindset in future missions. The coming year holds particular importance as Secretary General Jens Stoltenberg leads the development of a new NATO Strategic Concept 2022, which will look ahead to the challenges confronting the Alliance, as discussed in the NATO 2030 agenda, and beyond. Allies launched the last Strategic Concept ten years ago. For some, it may be tempting to focus on a fresh start, moving on from policies, concepts, and lessons learned associated with previous conflicts, including counter-insurgency operations in Afghanistan and its abrupt conclusion. Indeed, one consequence of this shift for PoC has been its transfer in 2019 from a robust role in NATO’s Operations Division to an under-resourced item under the control of the Secretary General’s Special Representative for Women, Peace and Security.

Even though PoC—and the policy itself—was singled out in the June 2021 Brussels NATO Summit Communiqué, the path forward to understand the policy implications and integrate PoC implementation into NATO’s partnerships, policy, exercises, operations, and mission planning could be more clearly defined. As NATO evolves its thinking about future missions and force posture, it is in its Allies’ and partners’ continuing interest to maintain prioritization of PoC to demonstrate continued adherence to the Alliance’s founding values and maintain robust public support.

This publication is part of the "Strengthening NATO’s Ability to Protect" project, a partnership with Stimson and PAX, supported by the Dutch Ministry of Foreign Affairs 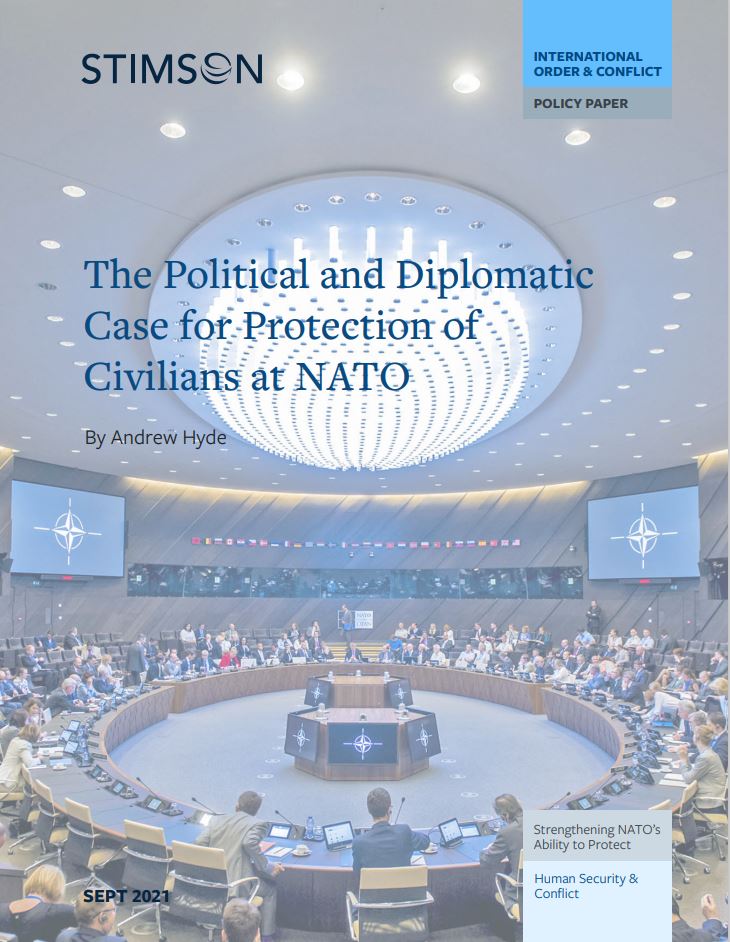 A political and diplomatic case for PoC at NATO