On Tuesday, 1 December 2020, PAX convened a virtual side-event to our annual Protection of Civilians Conference to explore the ways in which the United Nations (UN) Secretary-General’s Action for Peacekeeping (A4P) initiative has impacted Troop and Police Contributing Countries’ (T/PCCs) capacities to better coordinate for improved integration and implementation of the protection of civilians (PoC) in UN peacekeeping. During the workshop, panelists from A4P PoC Champion States and the UN’s Department of Peace Operations took stock of the progress made and challenges that yet remain in upholding A4P commitments. Afterwards, participants were asked to reflect on the implementation of PoC in peacekeeping operations in light of recent UN reforms and reviews, exploring new tools and opportunities for improved operationalization, as well as identifying concrete steps Member States, notably T/PCCs and A4P PoC Champions, can take to uphold their A4P commitments and improve capacities for PoC. The virtual workshop brought together experts from UN peacekeeping missions, UN headquarters, civil society organizations operating in peacekeeping contexts, international NGOs, and UN Member States.

A4P as a Platform for Engagement
Participants agreed that the A4P initiative has provided a platform for engagement within and among the UN, its Member States, including T/PCCs, and other peacekeeping actors by establishing a common language and more explicit understanding of shared peacekeeping goals, needs, and priorities. Notably, there have been marked improvements in identifying gaps in analysis and in developing monitoring and evaluation tools by the UN Secretariat, as well as improvements in Member State partnerships and international dialogues, as seen in the outputs and restructuring of, for example, the Peacekeeping Ministerials and the Special Committee on Peacekeeping Operations (C34). However, there was a consensus among participants that there is ample room for improvement of prioritizing and operationalizing the PoC across all levels.

Training
During the event, participants repeatedly highlighted that pre-deployment and in-mission training are key to improving operationalization of PoC, including on PoC-related capacity-building initiatives and improved community engagement techniques. In this vein, emphasis was placed on improving peacekeepers’ communication skills and abilities to exhibit empathy and build trust with communities. Panelists and participants alike highlighted the need for mission-specific, contextual PoC training for peacekeepers to allow missions to respond to the specific challenges and dynamics of their localities and local communities. Due to high turnover rates of uniformed personnel in mission rotations, information-sharing and experience- and relationship-building can be a challenge; in response, participants suggested “twinned” training between T/PCCs and mentoring could help better prepare peacekeepers for their time in the field ahead of deployment.

Coordination and Priority Setting
From the discussion it became clear that while the Secretariat’s Light Coordination Mechanism (LCM) can serve as a critical tool to identify capacity gaps and provide guidance on partnerships for improved response, it remains under-resourced and under-utilized. Similarly, the implementation of tools such as the Comprehensive Planning and Performance Assessment System (CPAS) have already begun to show their usefulness in assessing progress and context-specific goals, yet even full roll out of CPAS technically remains in the nascent stage, as it relies on both clearer mission priorities as well as more information sharing and resourcing from Member States to further develop indicators to measure impacts.

Gender
UN peacekeeping missions have begun to realize additional reforms and improvements in line with the commitments made to implement the Women, Peace and Security (WPS) Agenda, a related priority theme under A4P. However, much more is needed to really prioritize the implementation of a gender lens and gender-sensitive policies to realize the proven benefits associated with women’s full and meaningful participation across all levels of peacekeeping. Current initiatives, such as increased women in patrolling, have proven successful and essential, including in protecting civilians and supporting them in crisis. During the breakout sessions, participants noted that female engagement teams are becoming increasingly common among peacekeeping forces, an area suggested for further exploration by T/PCCs and missions.

COVID-19
Several participants also raised the unavoidable impacts that the global COVID-19 pandemic on UN mission operations. There are now additional challenges that threaten the performance of and working methods within missions, including direct changes to deployment. However, the pandemic has also provided two clear areas for better integration and implementation of PoC. First, virtual communication has shown to be an important tool for more regular contact to headquarters when problems are detected, which should be continued after COVID-19 restrictions end for continued improved coordination. Second, COVID-19 needs have underscored that additional humanitarian steps, such as facilitating assistance and medical care, are key points of civilian protection that should be factored into the planning, resourcing, and mandating of UN peacekeeping operations.

Conclusion: Concrete PoC implementation measures
Over two years on from the inception of the UN Secretary-General’s A4P initiative, this virtual workshop discussion took stock of the progress, challenges, and future opportunities for further Member State engagement on PoC in peacekeeping in light of recent reforms and restructuring. This is particularly salient ahead of the upcoming 2021 UN Peacekeeping Ministerial in Seoul, at which Member States will have the opportunity to make concrete pledges for tangible contributions to implementation of their protection and related commitments under A4P. In these discussions, T/PCCs and A4P PoC Champions hold a unique role to drive the dialogue and pledging on PoC to ensure it remains a sustained priority in peacekeeping missions. In this vein, these Member States should consider concrete measures focusing on: improving training for PoC; ensuring adequate resourcing for coordination and information sharing, as well as planning and evaluation; and co-prioritizing implementation of the WPS agenda.

Latest publications about this event 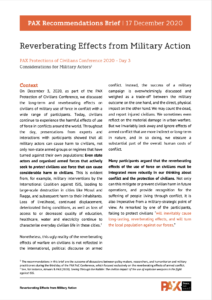 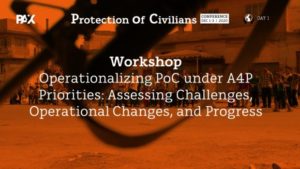 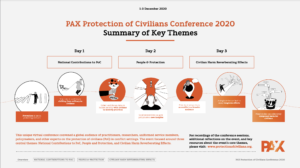 PoC week event: Training for the protection of civilians